An Office of Laughs

Whilst working on an ex-office tower block being converted into residential flats, our team stumbled upon these messages which had been left by former employees. The office must certainly of been a great place to work if the love that these enterprising graffiti artists had for it is anything to go by.

We at CONCORR wanted to wish the building owners all the best with their conversion from commercial to residential, a task which we know is not always easy. Anyhow the people who used to work there clearly had great memories of the building and we hope that the new residents can make great memories, just the same.

Our Managing Director Michael, attended a great annual lunch at the chartered institute of highways and transportation in the Grosvenor Hotel in London.

Michael and those on table 110 had a great time and it was fantastic to see so many faces from past and present among the 1300 attendees. 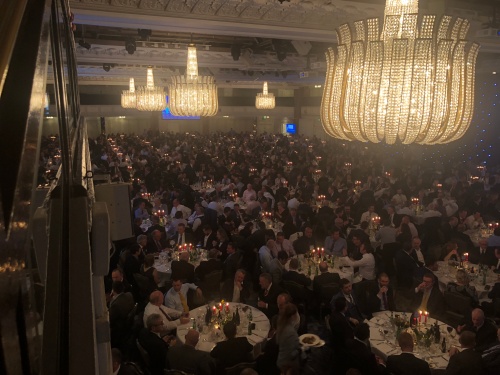 Inspection and Diagnostic testing at Capita

A road-trip for the Concorr team today, as Managing Director Michael Nugent presented to engineers and associates at Capita in East Grinstead.

Michael spoke about the importance of conducting regular inspections on structures and what the primary causes of stress to concrete are. Cracks in concrete can result in carbonation and eventually the corrosion of load bearing steel beams. It is important that engineers and building administrators employ the services of corrosion inspectors to spot damage in concrete before it becomes a problem.

As-well as discussing the technical side of testing, Michael spoke about the legal aspect of concrete corrosion, outlining the EN 1504 phase plan which is the legislation covering diagnostics. Michael himself was a contributor to the enactment, allowing him to give detailed information to the engineers.

Many thanks to all those at Capita who attended and we look forward to our next trip to sunny Sussex!

Two buildings owned by Portsmouth City Council have been investigated and found to be ‘not as strong as expected’. 18 storey buildings Horatia House and Leamington House are home to 800 people.

Since the Grenfell Tower fire, issues with LPS blocks have been emerging across the country.

The Bison system of large panel construction was used in the buildings.

After this disaster, LPS blocks were meant to be strengthened however Southwark Council found out that tower blocks on its Ledbury Estate hadn’t been brought up to the required standard.

Since then, many other housing associations have been carrying out more checks on large panel blocks.

In Portsmouth alone, there are five other Council owned LPS blocks. However, the Council says that following structural surveys they have no concerns about these blocks.

Once suitable relocation areas are found, Residents of the 272 affected will be moved out “as soon as possible” but flats will not be evacuated immediately.

LPS construction became popular in the UK in the 1960s as a cost-efficient way of building housing.

Both of the  schools have 1960’s steel-reinforced concrete paneled façades. Over many years they have been suffering from distress and water ingress issues.

Following surveys carried out by the company’s Survey Division, the Technical Project Management was recently secured. The works are scheduled to commence on both schools in summer 2018.

Concorr Associate Bill McKeown and his team in the Technical Product Management Division will oversee the Project. Bill has been working closely with the client for several months preparing for the tender and Project Processes.

Bill commented on how this is an excellent opportunity to work with one of our clients on two projects to deliver a major scheme within program and budget.

This month a major external refurbishment project draws to a close with the summer months approaching. De La Warr heights is a landmark building on the sea front in Bexhill on sea.
The building is for mixed use, with residential areas on multiple floors and retail space on the ground floor.
The building also has underground parking.

De La Warr Heights before refurbishment
Owned by a prominent London based property company, the building has been the subject of an extensive façade renovation scheme.
This included the removal of the failed render system and application of a new external insulation render. The project was technically as well as contractually demanding due to the building and its location.
The results are a fresh look to this iconic sea front building, as well as much improved insulation property. 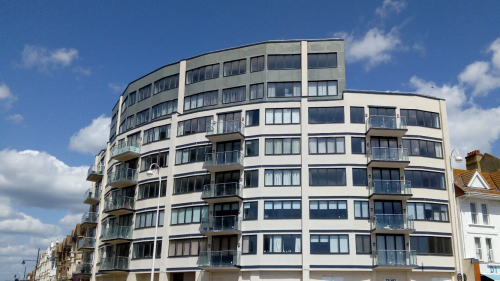 Concorr Heritage Division have secured another Norman Castle to survey. This will be the 2nd in the past 6 months having completed Rochester Castle at the end of 2017 and bidding on 2 others in the UK at present. 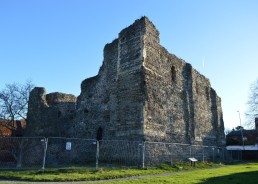 The survey is a stone by stone survey, therefore very comprehensive and complicated.

Our roped access teams will access all parts of the structure to inspect 100% of the areas as well as making safe loose/dangerous elements.

The report will be used to formulate options for the castles future to make it more accessible to the public and explore the possibility of other users.

This month we welcome three new members to our technician teams.

Seen here on a recent survey of the Norman Castle, Canterbury are (from left to right) Bradley Spurr, Chris Bennett and Connor White.

Bradley has a background in Ndt and diagnosis having worked for a testing company across the UK on a range of structures.

Chris is an IRATA trained roped access technician and has experience of bridge inspections.

Connor is an IRATA trained roped access technician with on and offshore experience in inspection and testing as well as Helipad and access netting systems.

The latest additions to a growing Concorr Family!

Jennifer takes on the role of company Finance Manager and has already shown her passion for the task setting about reviewing and changing procedures, systems and generally keeping the companies Directors and Managers in-line when it comes to company finances.

She joins us having recently moved to the UK from South Africa where she had 11 years’ experience in accounts management.

Jennifer has 2 young children and enjoys art, swimming and the great outdoors – South African Safari game reserves and weather vs. Kent countryside and rain, must be mad!

Welcome to the team !